Gambling on the Side Effects of Antidepressants: Does Pfizer Play Dice?

This piece by Daniel O’Sullivan was first posted on Crikey.com. Our interest was stimulated by a query to RxISK from Daniel who had been told by the Australian regulator (the TGA) that they only had one report of this. Looking for gambling in RxISK, gives 1 case in Australia, but 4 cases of pathological gambling – more than from all the rest of the world combined, and 8 cases of impulsive behavior. In the FDA database, there are many more reports from the US and Europe with a Proportional Reporting Ratio for impulse control disorder of 11.2 and for impulsive behavior is 10.0. These are very strong signals. 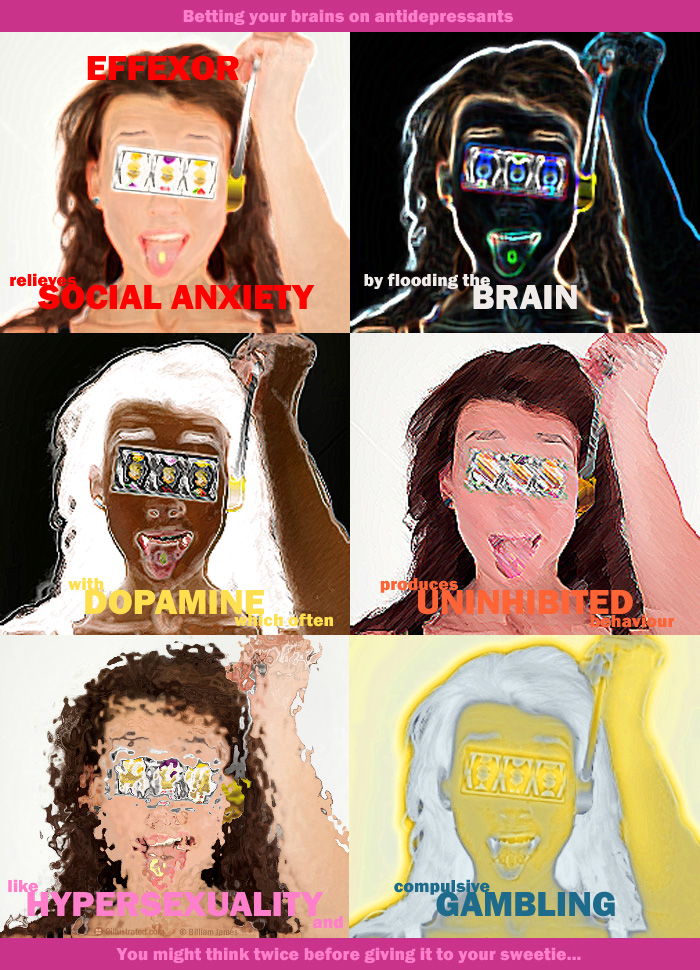 In June last year, three months into a prescription for anti-depressant drug Efexor, former financial analyst Tim Hillier left his hotel to wander the empty streets of Alice Springs in an attempt to clear his head. An hour earlier, he had wagered $80,000 — almost the entirety of his life-savings — on a first-round Wimbledon tennis match featuring Aussie hope Sam Stosur.

With Stosur faltering in the opening set, Tim knew he should be sick with panic. Instead, the fear just gnawed away at the fringes, relegated to the background by a thick, medicated haze from the Efexor intended to dull his severe obsessive compulsive disorder. “I was walking the streets just thinking ‘f-ck, have I actually placed this bet?’,” Tim said. “Have I actually wagered all this money on a single tennis match?”

“Paul”, a father of two from Adelaide, took Efexor for almost three years after being diagnosed with depression on his first visit to a psychologist. Initially hesitant at jumping head-first into the world of anti-depressants, Paul was reassured by his doctor about Efexor’s high success rate. But Paul too began to suffer crippling gambling addiction.

“It’s not a targeted drug, it doesn’t target depression specifically, it targets everything. It takes away all of your feelings, so you become a shell of a person. You’re still able to function, but you just don’t feel anything, you don’t feel any fear of consequences at all,” he said.

Paul and Tim, both in a search to understand their unexplained gambling binges, came across an online discussion thread entitled “Efexor and Gambling”. The thread, first started in 2007, reads like the rawest form of group therapy as strangers congregate to offer up accounts of reckless and compulsive behaviours acted out while being prescribed Efexor. There are tales of thousands of dollars frittered away on pokies machines, on casino floors and at the track, stories of ruined relationships and shattered careers. The common theme is an unexplained and seemingly unnatural disregard for consequences.

Jolted by the possibility of a link between his destructive behaviour and his long-term medication, Paul decided to seek more information from Efexor manufacturer, Pfizer. When he contacted the pharmaceutical giant directly, he was met with a surprising admission.

“I contacted Pfizer and I asked if they knew that Efexor could possibly cause gambling and sexual misconduct and they responded with, ‘oh yes we knew that, 0.8% of people will get that’,” he said. Pfizer informed Paul these dangers were presented as a possible side effect in the medication packaging under the umbrella term “uninhibited behaviours”.

“How am I supposed to know what an ‘uninhibited behaviour’ was?” he said. “What a cloaking of an evil thing is that? That could be me parachuting or hang gliding or running down the beach with Speedos on! How was I to know it was going to be the type of addictive behaviours that would ruin my life?”

Efexor, first introduced to the American market in 1993, is now well established as one ofAustralia’s most commonly prescribed anti-depressant medications with more than 1.2 million prescriptions serviced in Australia in the past 12 months. At low and moderate doses, it acts only on the brain’s mood control neurotransmitters, serotonin and norephinephrine. But at high doses of over 300mg a day it also effects a third neurotransmitter called dopamine, which is responsible for reward-driven behaviours and has been associated with risk-taking behaviour and addiction.

It’s this dopamine effect that can cause problems, according to world-renowned psychiatrist, psychopharmacologist and author Dr David Healy. “When Efexor is taken at high dosages it triggers a flood of dopamine and becomes what we call a ‘dopamine agonist’. This can be responsible for the types of dangerous impulsive behaviours.”

While dopamine agonist drugs, such as Pfizer’s Cabaser, have been successful in the treatment of neurological disorders such as Parkinson’s disease, they made headlines in 2010 when hundreds of Parkinson’s sufferers filed a class action against pharmaceutical manufacturers after allegedly becoming addicted to gambling and pornography due to their medication.

In the same paper, Dr Richards describes the attempts by pharmaceutical manufacturers to disclose the risks related to dopamine agonists to patients as “shameful”. It’s a valid assessment, says Dr Healy.

“Pharmaceutical companies have absolutely not done enough,” he said. “They have seemingly gone out of their way to deny that such effects could be happening.

“There is a management of adverse effects that at times seems aimed at closing off all loopholes from reporting. Companies are better placed than anyone to bring hazards to light but they seem to go into denial mode instead.”

While declining to comment on a possible link between Efexor and ICDs, Pfizer’s Amy O’Hara maintains all product information provided to doctors and patients is correct. “Pfizer rigorously monitors the safety of its medicines and works with the Therapeutic Goods Administration to ensure that the product information for doctors is up to date … based upon clinical trials and post-marketing surveillance,” she said.

Dr Jon Jureidini, spokesman for the global collective of health professionals Healthy Skepticism, believes it’s this “post-marketing surveillance” that is being neglected. While figures supplied by the TGA show that only one out of 1451 registered adverse reactions relating to Efexor actually link the drug to pathological gambling, Dr Jureidini believes patients aren’t getting the full picture.

“The TGA spends a lot of its money on assessing and improving new drugs which they need to do, but they don’t spend enough proportionately on monitoring what’s in existence,” he said. “The amount of people that test the drug in the research phase is minuscule compared to the amount of people that take the drug when it has gone to market and the reality is, about half of the serious side effects don’t emerge until after the drugs have been on the market for a couple of years.

“It is frustrating that the burden is then put on individuals to monitor adverse affects of drugs instead of regulatory bodies.”

Paul is certainly frustrated. “I can almost understand it from my doctor’s point of view, they get sold all these drugs by these salesmen who give them pens and pads and showbags and probably take them off to Paris once year when they’ve reached certain targets. They get told it’s a great drug by these reps, they don’t actually get emphasised the dangers that can happen — the type of things that happened to me,” he said.

According to Dr Jureidini, the cosy relationship between pharmaceutical companies and doctors is not fuelled by money but is more subtle. “Most doctors are honest about that and wouldn’t accept bribes,” he said, “it actually involves helping their careers along and mutually beneficial research education opportunities.

“It is [these types of relationships] that are going to lead to doctors choosing certain drugs just because they’ve got a free hand to hand [sample] when that might not be the best choice for the patient.”

“There are safeguards in place via the TGA and the Pharmaceutical Benefits Scheme, so there is a lot of pressure on them to be very, very open and forthcoming about any side effects,” he said. “Also, most doctors and most clinicians when they have time with the patient will go through and mention side effects that are commonly experienced, but they may not talk about side effects that affect one in 50,000 because the list is long and it can be very hard to actually go through them all.

“The expectation is that the people will actually have a look at the sheets of the information that go out with the boxes of medication.”

While Dr Baigent is supportive of the current regulatory system, he believes there is still a long way to go in the research and development of anti-depressants in Australia.

“There are two big concerns in this area in my view,” he explained. “One is that people will be prescribed the medication that might not need it. And the second one, which is just as a big a concern, is that people who will really benefit from it — and it would be lifesaving — will not receive it.”

Dr Baigent’s dual concerns are perhaps best reflected in the fortunes of two men inextricably linked by an Efexor prescription and the same fateful Google search.

Almost a year since he gradually weened himself off Efexor, Tim has yet to lay a single bet. But despite conquering his gambling demons, he remains enslaved to the OCD that has dictated most of his adult life. The ongoing search for medicinal help and a shot at normality continues.

“For me, the loss of the money is really a secondary issue. If someone said to me they could take away my OCD for $80,000, I’d do it in a heartbeat,” he said. “I often think it would be nice for once to pursue something that’s going to bring me a little bit of joy rather than just moping around and feeling shit all the time … there needs to be a point to it all at the end of the day. You need a bit of hope and something at the end of the rainbow, otherwise you can lose heart.”

The flipside of the same coin is family man Paul, who remains entrenched in his own, very different, battle for normality.

“I would never ever take an anti-depressant ever again,” he said. “To be honest I don’t think I even needed it to begin with. I was just expecting to be laid down on the couch like they do in the movies, but I came out with a prescription for one of the most powerful anti-depressant drugs there is.”

Four months since extricating himself from Efexor, Paul is still attempting pick up the pieces of a life decimated by ICDs. “You don’t fix three years of that type of behaviour in three months,” he said.

“It’s really the family side of things, its healing the wounds there that is going to be the big thing, I might not be able to keep the family together. I’ve got a wonderful wife and I’ve got to fight for that.”

Now firmly in recovery mode, all that is left to ponder is the endless parade of “what-if” scenarios.

“I honestly believe I just needed a pep talk, I needed to be told to “do a bit of exercise, change your diet, drop the beer, get on with life”. That would have been so much cheaper and easier in the long run.

“And I think that if Pfizer’s aim wasn’t just to get Efexor to the marketplace as quick as possible and they had of invested another half a billion dollars,” he considered ruefully, “they could have come out with a perfect drug.”

[Details of this article also appeared on ABC News]