Editorial Note: RxISK is all about people discovering things for themselves and alerting others to something that can make a real difference.

There have been some wonderful examples outlined in posts here on RxISK from Anne-Marie Kelly’s discovery of a cure for alcoholism – stop your SSRI and perhaps try a serotonin-3 antagonist like mianserin or ondansetron – to Samantha Dearnaley’s discovery that Champix (Chantix) had caused her epileptic convulsions. These were things that none of the experts knew.

Johanna Ryan gives another example below. As the resident psychiatric and psychopharmacologic expert, it’s worth noting that I had never heard of ‘Alice in Wonderland Syndrome’. It just shows that putting people with interest and/or motivation together can do far more to solve problems than going to see an expert – there are far too many things out there for one expert to know. Even if you think your expertise doesn’t amount to much, we have reached a point where pooling our expertise is a much better bet than relying on experts. (DH)

“White Rabbit,” by the Jefferson Airplane 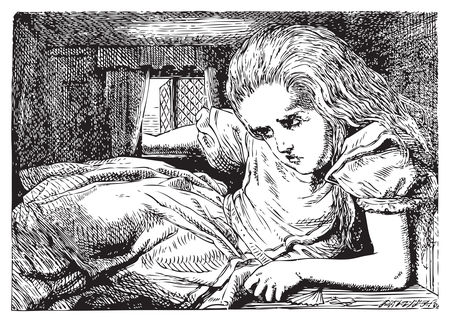 I first heard of “Alice in Wonderland Syndrome” last year while reading Oliver Sacks’ book, Hallucinations. Sacks is a neurologist who is fascinated with the range of experiences, good, bad and strange, that the human nervous system can give rise to.

In Alice in Wonderland Syndrome (AIWS), objects in the environment and even parts of your own body are strangely distorted. Just like Alice, you may perceive your own head or arms as huge, while the people around you seem tiny – or you may feel suddenly shrunk, while the furniture in the room towers over you. It’s best known as a rare effect of migraine headaches and Sacks speculates that Lewis Carroll may have gotten some of the trippy inspirations for his classic story from his own chronic migraines. It’s also been known to occur in epilepsy and in viral infections, especially in children. Anticonvulsant drugs used to control epilepsy and migraines are a standard treatment. Which was why it startled me to stumble across a case on RxISK.org – as a side effect of an anticonvulsant drug!

On the Patient Narrative page for Topamax, someone reported the following:

“Intense visual hallucinations. Objects in the visual field (e.g., computer monitor, hands, arms, desk, etc.) would move far, far away in regular time then come back and be grossly enlarged. It is almost like making an MS Word document change font sizes, from 12 pt to 2 pt to 350 pt, but it was everything I saw.”

Using RxISK.org’s features gave me some clues about this person’s experience, and how common it might be. Using the “A-Z Search” function under Reported Side Effects I found the FDA had eight reports of Alice in Wonderland Syndrome on Topamax, with a “PRR” of 438.8. That means the odds were overwhelming that the drug and the AIWS were connected.

The “Location” tab in Reported Side Effects told me that six of these were from Germany! One was from the UK, but absolutely none from the USA, even though Topamax is widely used here. Checking the Location tab for All Side Effects, well over half have come from America, with no other country even coming close.

Checking “Gender” and “Age” told me that all eight were female, and seven were teenagers.

Our friend on RxISK sounded more like an American adult than a teenage girl from Germany. Was she (or he) the first? Well, she’d probably never heard of Alice, so she reported this as a “visual hallucination.” Maybe others had too.

Fifteen of the 69 Visual Hallucination reports came from the USA, 18 from the UK, and only two from Germany. Two-thirds were female. There were nine children and 21 teenagers, but there were also twenty adults, and nineteen cases were “age unknown.”

Going to the “Outcomes” tab, I found that 39 of these 69 people had been hospitalized! That told me that probably only the more extreme cases were being reported – those where the person was terrified by their experience or it happened alongside more serious side effects.

By now I was hooked, so I went to Google. I found one professional paper on Alice in Wonderland Syndrome as a side effect of Topamax – a case report on a teenage girl in Germany who was taking the drug to prevent migraines. The authors had probably made that initial report to the FDA and may have alerted other German headache specialists to a symptom that certainly breaks up a dull workday.

There were a couple of American papers as well, though, including one about two patients with “palinopsia” and one with AIWS. All were taking Topamax for migraines. Fellow medical wonks can Google palinopsia – it’s even stranger than AIWS but I could not find a single report to the FDA.

Another paper described “Steroid-induced Psychosis Presenting as Alice in Wonderland Syndrome” and implied that the patient, who was on heavy steroids for severe asthma attacks, had been misdiagnosed with “schizophrenia.”

I also found several reports on patient discussion boards of AIWS on Topamax, including both Epilepsy.com (“Feeling a Bit Like Alice in Wonderland on Topamax”) and the psych board CrazyMeds. They were mixed in with reports of other strange symptoms – hallucinations, delusions, feelings of unreality or of standing outside one’s own body.

I was struck by something the moderator of CrazyMeds (who by the way is resolutely pro-med and will not tolerate any psychiatry-bashing on his board) said: “As with all anticonvulsants, anything Topamax can fix is also a potential side effect.” In other words, a range of symptoms of epilepsy, migraine and even bipolar disorder could also be side effects of an anticonvulsant drug taken to treat these conditions.

If this is true then RxISK and similar efforts could make a huge contribution. As Kalman Applbaum noted, many FDA reports filed by doctors consist only of ticking a box on a list, say for “hallucination” or “anxiety.” RxISK allows us to describe what’s going on and how it affects us, as the Alice in Wonderland sufferer did. If we know people taking anticonvulsants for one condition (say, depression) experience symptoms typical of other conditions (weird visual effects associated with migraine auras), the link to the drug becomes clearer.

In the case of Cymbalta, another drug highlighted on RxISK, people taking the drug for back pain have experienced the same side effects (nightmares, moodswings, etc.) as those taking it as an antidepressant. Observations like this could teach us more about the drug and help prevent patients from being misdiagnosed with new “diseases”, like that asthma patient with AIWS.

I looked at a few of the other anticonvulsants (Neurontin, Lyrica, Lamictal). No reports of AIWS. However, all have a fair amount of Visual Hallucination and Visual Disturbance reports and all include far more Americans and adults as opposed to German teenagers. So who knows! The FDA has a category called “Feeling Abnormal” which is very large and could be hiding almost anything including Alice. We need people to report to RxISK to find out what’s going on – FDA is like Humpty Dumpty for whom words where what he chose them to mean.

RxISK reporting could help bring together communities of doctors and patients who seldom talk to each other, even though we are increasingly prescribing or taking the exact same drugs. Reading the discussion boards, I noticed psychiatry patients complained that their doctors denied these problems could be happening or connected to the drugs. Neurology patients found that their doctors were much quicker to concede that these effects were drug related, although they complained of being told to just ‘hand in there’ by doctors who didnt take the side effects seriously enough. We can also share reports from various countries where the drug-use practices can be very different, even for the same illnesses.

Reports to RxISK could also reveal a lot about the brain and the mind. Oliver Sacks first made me aware how much neurologists owe to accidents, breakdowns and “side effects”, and the reports of non-scientists who had lived through them. Who could forget poor Phineas Gage, the railroad worker who survived a sharpened crowbar being driven through his left frontal lobe? Doctors and experts flocked to examine and quiz him, trying to learn more about the brain works. Fortunately, most people logging on to RxISK don’t have anything nearly as awful as Phineas Gage had but because we know more now about the brain than we did then, reports of much less dramatic things can teach us a huge amount.

Editorial Note: The only thing a psychiatry expert can add to this is that it’s not a surprise that the recognition that this is ‘Alice in Wonderland Syndrome’ came from Germany. For well over a century, the Germans have been much interested in paying close attention to superficially similar things and distinguishing between them than anyone else has.